Smart chair, and desk to track your backside for employers

The office of the future features unconventional open spaces, ergonomic products, and — coming soon from furniture designer Herman Miller — smart chairs and desks that track your every movement and report back to your boss.

Introduced this week at the NeoCon commercial interiors show at the Merchandise Mart, the Fitbit for the deskbound connects office workers and their posteriors to the internet, harvesting such data as when you sit, where you sit and how often you rise on command to stretch your legs.

It can even tell if you're slouching, standing in for mothers everywhere by reminding you to sit up straight.

"No one has made an interaction between a chair and a desk," said Greg Bylsma, North American president of Zeeland, Mich.-based Herman Miller, perhaps best known for its ergonomic Aeron chair, whose distinctive design has become an office staple since its 1994 rollout.

The platform, dubbed Live OS, works with an interactive sitting and standing desk, which launched this week, and a specially wired Aeron chair, which will be available in January.

For the chair, a static discharging thread already woven into the Aeron fabric is turned into a sensor that takes readings on seat position.

Per sitting and standing desk, the technology adds a $100 one-time hardware cost, with a yearly subscription fee of $60. Prices for the smart version of the chair have yet to be determined.

When paired with an app, the chair and desk will monitor your position, automatically adjust preferred settings as you switch to other work stations and nudge you with vibrations and cajoling messages to stand up at intervals throughout the day.

The latest innovation in the internet of things encourages healthier desk habits for employees while collecting new data for their employers, who can maximize the efficiency of office space by determining where and how people actually work — or don't.

Ryan Anderson, Herman Miller's director of commercialization for Live OS, said the data is "anonymized and aggregated," downplaying the notion that employers are watching your behind. 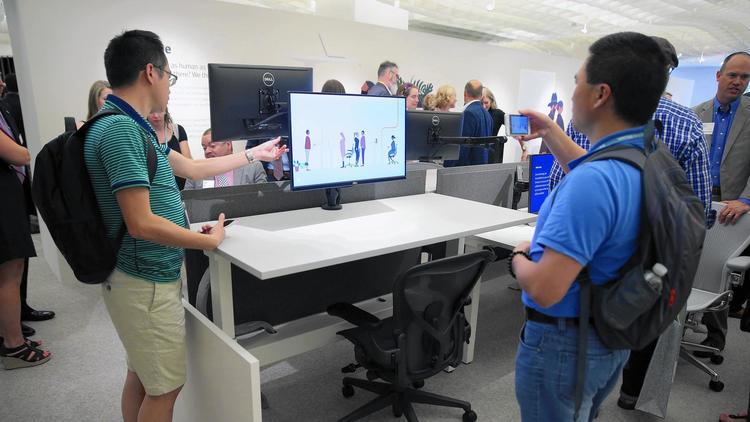 A Live OS sit/stand desk and chair are displayed June 12, 2017, in the Herman Miller space at the NeoCon commercial interiors trade fair at the Merchandise Mart in Chicago. The desk and chair are designed to monitor workers’ posture and encourage them to stand up during the workday. (Terrence Antonio James/Chicago Tribune)

"If someone wanted to look at every desk and correlate (the data) with who sits there, they can do that," Anderson said. "The vast majority of folks we talk to want to measure the space, not the people."

Sales of the Aeron chair, which was "remastered" last fall, have been slumping in recent years as offices have evolved into unconventional open spaces with communal work areas.

The showrooms at NeoCon reflected the open-office evolution while repudiating the cubicle farms of old, a concept that also was invented by Herman Miller — more than 50 years ago.

"For the last 50 years, furniture companies have been giving us stuff that's kept us sitting in cubicles, at desks and chairs that don't move," said Robert King, founder and CEO of Humanscale, the 34-year-old New York-based furniture company. "Now we're finding out that sitting perfectly still in an isolated environment is one of the worst possible things you can do for your health and well-being." 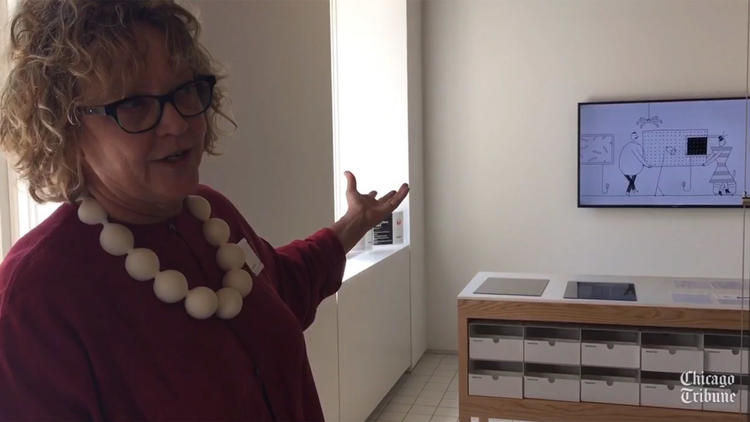 Arianna Huffington, co-founder of the Huffington Post, who left the news website in August to launch Thrive Global, a lifestyle and well-being website aimed at ending stress and burnout, was a keynote speaker at NeoCon on Monday.

"The connection between design and health and reducing stress is incredibly important," Huffington said in an interview after her speech.

Huffington touted everything from standing desks to green walls as beneficial to the modern office and its stressed-out workers. But she was most enthused about another innovation: napping pods.

"People, if they are tired, can take a 10- or 20-minute nap instead of having another cup of coffee and a cinnamon bun," Huffington said.

Herman Miller executives are hoping the smart desk and chair platform will be the next big thing, but innovation sometimes can chart an unpredictable course.

The cubicle eventually was disavowed by its creator, Herman Miller designer Robert Propst.

Herman Miller's Bylsma acknowledged the cubicle's tarnished legacy but didn't disown it, saying it provided a "great way to work" in decades past.

"We all know that 'Dilbert' has taken its fair shots at the cubicle, but like anybody, we're proud of our past innovation," Bylsma said. "And we think (the smart chair and desk) is another one that's going to take us to a new spot."

Correction: An earlier version of this story gave the incorrect subscription price for the Herman Miller sitting and standing desk.